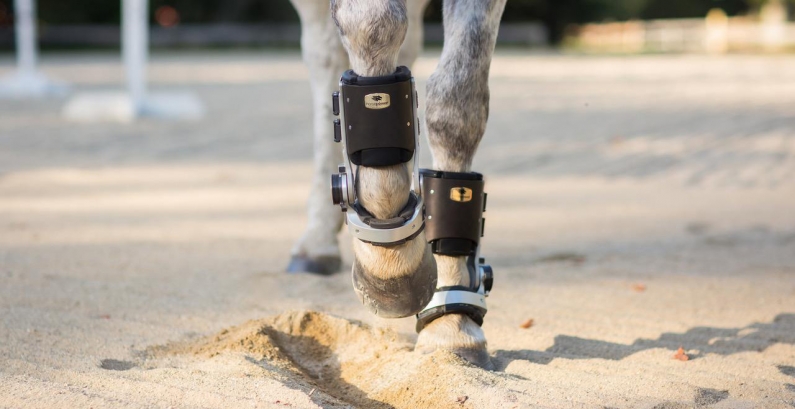 San Antonio, TX – November 20, 2017 – Horsepower Technologies™ Inc. (HTI), a Massachusetts-based healthcare and technology company dedicated to combating equine lameness, has developed a scientifically-proven, innovative product for horses that promises to significantly reduce both the rehabilitation time and incidence of re-injury following tendon and ligament trauma. Horsepower Technologies’™ ground-breaking product, FastTrack™, the world’s  first rehabilitative orthotic device for horses, launched at the 2017 American Association of Equine Practitioners (AAEP) convention in San Antonio, Texas, November 17-21, and will be generally available to the market in early 2018.

“We are thrilled to introduce FastTrack™ to the market. After nearly eight years of diligent research and development, as well as countless hours of on-horse and in-lab testing, we are confident that the product will significantly help horses during their rehabilitation from lower-limb soft tissue injuries. FastTrack™ will provide veterinarians with a powerful new tool in the treatment of equine lameness,” said Mouli Ramani President and CEO of Horsepower Technologies™. 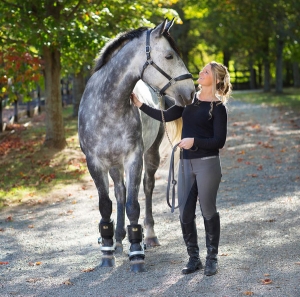 Soundness through Science
Based on years of innovation and extensive research, FastTrack™ has been scientifically shown to limit over-extension of the horse’s fetlock joint, thereby significantly reducing strain on the injured flexor tendons and ligaments and reducing the risk of re-injury. As a result, horses can more safely and quickly resume exercise without exacerbating the injury.

Dr. Carl Kirker-Head, a prominent equine orthopedic surgeon and equine sports medicine expert, has served as Horsepower Technologies’™ Chief Veterinary Officer and its lead equine researcher since the company’s inception. He also is an associate professor of large animal

“FastTrack™ provides the equine veterinarian with a highly innovative product unlike anything we have previously used. This customized orthotic will be one of the most powerful tools we have in the treatment of many equine lameness cases. Today's modern medical technology has allowed development of this amazing device," said Dr. Rick Mitchell, a member of the Boards of the United States Equestrian Federation, American Association of Equine Practitioners and American Horse Council who has served as an attending veterinarian for the U.S. Equestrian Team at six Olympic Games.

Innovative Technology
Made of aircraft-grade aluminum and high-strength stainless-steel, and based on novel structural and material-science innovations found in human orthotics over the past several years, FastTrack™ enables early mobilization and out-of-the-stall load-bearing exercise for horses that have sustained flexor apparatus injuries. FastTrack’s™ advanced features include a: (i) patented exoskeletal structure, (ii) patented Restriction of Motion (“ROM”) device, SafeStop™, that controls the maximum permissible angle of rotation of the fetlock joint and (iii) customized thermo-formable padding. HTI plans on adding a suite of sensors and diagnostic software in future versions of the product.

"FastTrack™ is a solution that horsemen have needed for years. It will extend the careers of horses that suffer from soft tissue injuries to the lower leg," said Dr. Mark Cheney, an equine veterinary leader in the Thoroughbred and Standardbred racing industry.

Patented SafeStop™ Technology
A patented adjustable ROM control that allows user-defined mobility during the healing process, SafeStop™ limits the maximum permissible extension angle of a horse’s fetlock joint. This allows the veterinarian to set a preferred range of joint motion, reduce load on injured flexor tendons and ligaments, and ultimately reduce the risk of re-injury. As the horse’s health improves, a greater range of motion can be allowed via an easy and intuitive re-setting of the SafeStop™ angle, thus allowing the tendons and ligaments to gradually adjust to an increased load.

“One of the most innovative elements of FastTrack™ is the inclusion of their SafeStop™ technology. The ability to safely and securely control the level of joint extension, which will allow the veterinarian to control tendon and ligament load through increasing exercise levels, will result in an optimized rehabilitation program," said Dr. Tim Ober, who has served as the Team Veterinarian for the U.S. Show Jumping Team since 1999 and who has cared for some of the most famous horses in show jumping at five Olympic Games.

Custom & Protective Fit
FastTrack™ has been designed with the horse’s health and comfort in mind. It incorporates an innovative heat formable padding which provides a snug, supportive fit which allows natural motion of the lower limb while ensuring no abrasion nor discomfort for the equine athlete. Rather than being stall-bound, horses can now more comfortably and safely walk, trot, or canter at the desired points in their recovery regimen while wearing the device, and thereby accelerate their recovery.

“I truly wish that FastTrack™ existed when I was competing professionally,” said David O’Connor, the three-time Olympic medalist who won the individual Gold in eventing at the 2000 Sydney Olympic Games. “I know several Olympic horses that would have benefited from Horsepower’s customized orthotic technology. The next generation of equine athletes will have a powerful new tool to help return them to competition after a sporting injury – it’s a Game Changer!”

FastTrack™ will be shipping to early adopters in December 2017 and will be commercially available in early 2018.

Previous Return To Newsroom Next